As we know, exercise is important in helping to develop and maintain a healthy and happy lifestyle. And, did you know, trampolining is a fun and very effective way to exercise. In fact, trampolining may be the best and, in my opinion, the most fun method of exercising on the planet.

Like most sports, however, it is important to follow basic trampoline safety rules. The trampoline is a unique piece of equipment and it is always a good idea to get lessons from a qualified trampoline coach. Parents and participants alike would benefit from a trampoline safety course and some practical lessons on using the trampoline to its fullest potential.

I have long been impressed with the Freedom Sports Company President Ivan MacMillan and his commitment to trampoline service and safety. Ivan is himself a Nationally Certified Trampoline coach and has been actively involved in the competitive scene for many years. He brings his years of experience and expertise to every VIKAN Trampoline sale.

The VIKAN Trampoline is designed to keep jumpers in the centre. There are no corners to fall from, just equal tension from the springs that form a circle around the jumper. The spring from the trampoline mat is ideal for backyard situations where too much or too little height can be a problem.

I encourage you to take lessons and perhaps even join a trampoline team and who knows, in a few years, we may see you on TV at the Olympic Games.

I got my Vikan Trampoline in 1983, and 20 years later it’s still going strong. 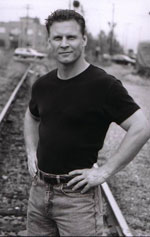 As a former 6-year member of the Canadian National Trampoline Team and now a professional stunt performer, I have a longstanding relationship with Freedom Sports. Back when I was competing for Canada, the team I belonged to, the Shasta Trampoline Team, based out of New Westminster, was approached by both of the local manufacturers of backyard trampolines. Our coach assessed both products and determined that the Vikan Round Trampoline was the safest on the market. Well, in the last 20 years more and more manufacturers have discovered the added safety benefit of having the round design, however not all rounds are created equal.

As I mentioned, I have been the happy owner of a Vikan Trampoline for 20 years, but what I didn’t say earlier was that aside from coming apart for the numerous times I’ve moved, my Vikan has been set up outside everyday of that 20 years. Winter, spring, summer and fall. Everyday since 1983! In 1998 I finally replaced the bed, springs and pads, but that gave me 15 years of uninterrupted fun on my Vikan. Okay, maybe I wasn’t out there everyday. In the early years it was my brothers and I, but there have been a slew of nieces and nephews jumping on it until my own kids were born. Now they practically live on it. Almost everyday after school they are out there for at least 20 minutes, and in the summer it’s nonstop. We even have a tent that Freedom Sports sells to fit on to the trampoline so the kids can sleep out there.

How is that different than other rounds? Well, because the Vikan has only 8 pieces in total to it’s frame, there’s less chance of water getting into it and rusting. Plus, the frame itself is made of a thicker gauge of steel than most of the rounds out there. Even though it’s not recommended, we had 6 adults bouncing on a Vikan during our Shasta shows with no major concern about the frame strength. And when you look at the size of most of the boxes other round trampolines come in, you’ll see that the pads of the Vikan alone take up almost the same space. I could go on and on, but suffice it to say, if you were to buy a Vikan Trampoline from Freedom Sports I’m sure you will have years and years of maintenance free bouncing.

Please accept this letter of thanks. We purchased a Vikan trampoline from you in the fall of last year and we are all very impressed with it. I am comfortable knowing that my children are bouncing on a quality product. Your high level of customer service also impressed me. You delivered on time and were very patient and friendly during the setup. I would recommend your company to anyone looking for a trampoline. In fact, I have already given several of my neighbors your number.

P.S. the kids say thanks too!

This unsolicited letter is sent to you in hopes you may use it to convince prospective customers to invest in your Vikan trampoline and not make the mistake I did and get the less expensive product from Costco.

I have provided you a piece of the blue protective pad that covered the springs around the perimeter of my Costco Hercules trampoline. It is just over one year old. Most of the nylon tie-downs have come off and the pad has torn at several of the seams. Please understand this condition did not occur due to abuse: We bought it and put it in our backyard in May, 1990. In October we disassembled the trampoline, boxed it and put it in our garage. We put it back together in April, 1991 and by September; the pad degenerated to its current condition.

Having replaced the perimeter pad with the one we bought from you, I have since made an inspection of all the other parts of the trampoline. In my opinion, there is no question you have a superior product and I regret I made my purchase based on price instead of quality.

If anyone would like to verify this letter, they can call me weekdays between 8:30 a.m. and 5:00 p.m. Costco is a great place to buy food, shampoo, etc., but not a trampoline.

Thanks very much for the new trampoline. I very much appreciate your excellent service and response to me. In this day and age, it is rare to see people live up to everything that they promise, and it is certainly easy to see why you have a successful trampoline company.

Thanks again for sewing the mat of our trampoline. I just realized that ten years have gone by since we purchased the trampoline and this is the first time that it needed repairs. Even though it was gone only a few days, the children missed having the tramp.

All three of our children have benefited from owning a trampoline as it gives them an awareness of and practice of body movement in space. Jacqueline (14 years old) has won summer diving awards and championships, six over the last six years. People say that she has an advantage because of the tramp; they are right. Lise (11 years old) is now a national level gymnast. She still enjoys making routines on the tramp and practicing her somersaults. Jamie (4 years old), just like his older sisters did, is at the stage where he just enjoys jumping on the trampoline doing simple tricks like bum drops, knee drops, or star jumps. His two favorite games are jumping with the lawn sprinkler underneath on hot days and jumping with me holding hands. We don’t know what his sport will be but he sure is having fun developing body awareness.

It is not just children that enjoy the trampoline, Patti and I both have our time on it. I still do some of my old tricks but much more carefully. Our visitors young and old enjoy the tramp as well. We have found over the years that children tend to stay within their ability level making the trampoline a safe educational toy.

We are looking forward to the next ten years.

We purchased a Vikan Trampoline from you during the Puyallup Fair ten years ago (1983). We were a little skeptical about spending that much money for a toy, so we thought! It didn’t take us long to find out it wasn’t just a toy, it is fun and exercise for the whole family.

We have three children. There ages in 1983 were 11, 7 and 3. Our thought at first was . . . after a few months the kids would get tired of this thing. But that never happened, ten years later our granddaughter enjoys it! This thing called a trampoline has turned out to be the best investment we ever made to keep the kids home and occupied.

After ten years of our family and most of the neighborhood constantly using and abusing this thing, it has finally had its first problem. With three teenage boys jumping at once, the mat tore at the edge between two springs. Amazingly we weren’t even upset, we figured we got more than our moneys worth. This trampoline is used year around through rain, wind, hail and snow storms. Millions and millions of bounces! Thousands of people are entertained each year – just in our back yard.

Unbelievably the price hasn’t changed in ten years! The best part of all of this is . . . we were able to replace just the mat and it’s good for another generation!

Thanks for the great times.

I knew my kids would enjoy the trampoline — but I had no idea how much! Nine months later the “new — hasn’t worn off”.

I am so glad we spent the little extra money and bought the Vikan. I’ve noticed lately how all the cheaper trampolines are sagging and have bent frames after only a few months of use.

The Vikan is everything you said it was — our family is enjoying it thoroughly.